I go through phases with my hobbies, and decorating my house has been no exception.  We moved in over two years ago, and I went through an intense phase right away of getting everything put together, but lost steam before I could declare total victory.  Getting our HVAC system redone this summer has reinvigorated me, because new drywall in places means pretty much everywhere needs to be painted (which I contemplated when we moved in, but it was pretty low on the priority list).  So far I've painted the kitchen (pale yellow), and picked out colors for the dining room (greenish-grey) and living room (pale aqua), but I'm running up against another problem.  When we got a puppy this summer I was nervous about  him eating things, but he's been pretty good with one exception.  So far he's gone through three rugs, and I'm at a bit of a loss with how to deal with it, except to never allow him in a room with a rug unsupervised (he always chews them when we're not there).

Rug #1 was a fairly early purchase from Overstock.com, which we were really happy with, despite it being more of a maroon color instead of the brick red they said: 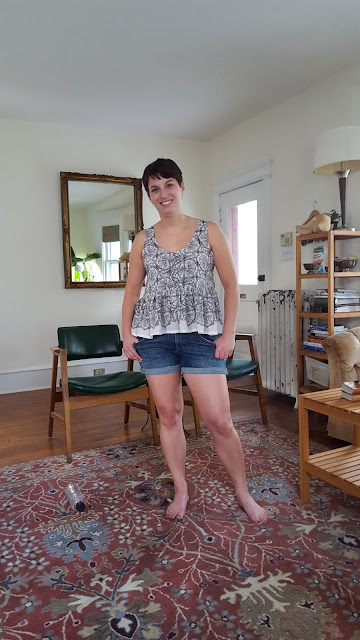 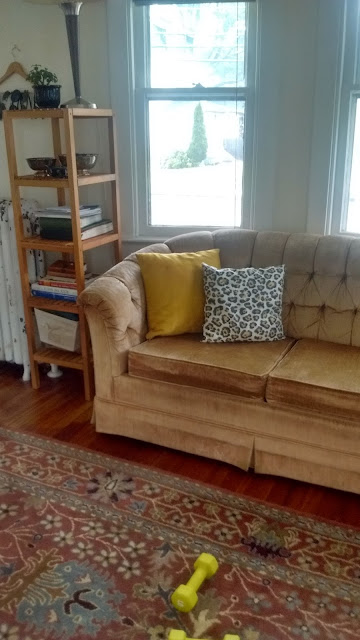 This one got a hole chewed/scratched through both the rug and rug pad about 2-3" in diameter.  One option is to see if it could be repaired in some way, but I'm not holding my breath on that one.

Rug #2 was in the dining room, and isn't super noticeable, so we just put that one away for the time being.

Rug #3 I bought as a training rug.  I thought it was going to be a flatweave rug, but again thanks to ordering off the internet (www.rugsusa.com), it ended up being a rag rug.  It was working fairly well, in that if we were in the room, we could correct behavior and I was able to fix small issues with the rug, and it was going well, until I started getting sloppy and leaving him alone in the living room.  A large hole later, it wasn't redeemable. 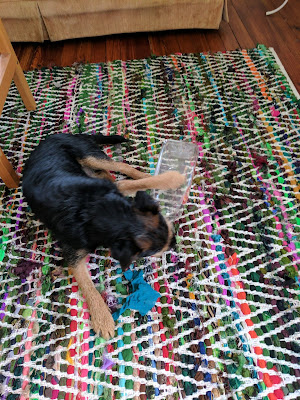 So we come to today.  So far, what we're working with is pale aqua walls (which aren't there yet, and could change if needed), a tan velvet chesterfield sofa (which I would love to recover, but probably a bit pricey and it doesn't really need it right now), two dark green chairs (I've been meaning to recover these since I got them 7 or 8 years ago, and they could actually use it), and pale beige leather chair, which also could use a recovering, but we're holding off until Eddie is out of puppy-hood.  So basically it's all just a bunch of colors that could change, which isn't super helpful.  There is also a stained glass window by the stairs which is primarily burgundy, pale blue, and yellow.

I've picked out a few bright options, and now I just have to convince John that one of them will be good (for some reason, rugs are a super tough thing for us to agree on).  I like rugs that incorporate a bunch of different colors, and all of these incorporate the colors throughout the first floor - aqua, yellow, orange-red (which is the accent color in the dining room). 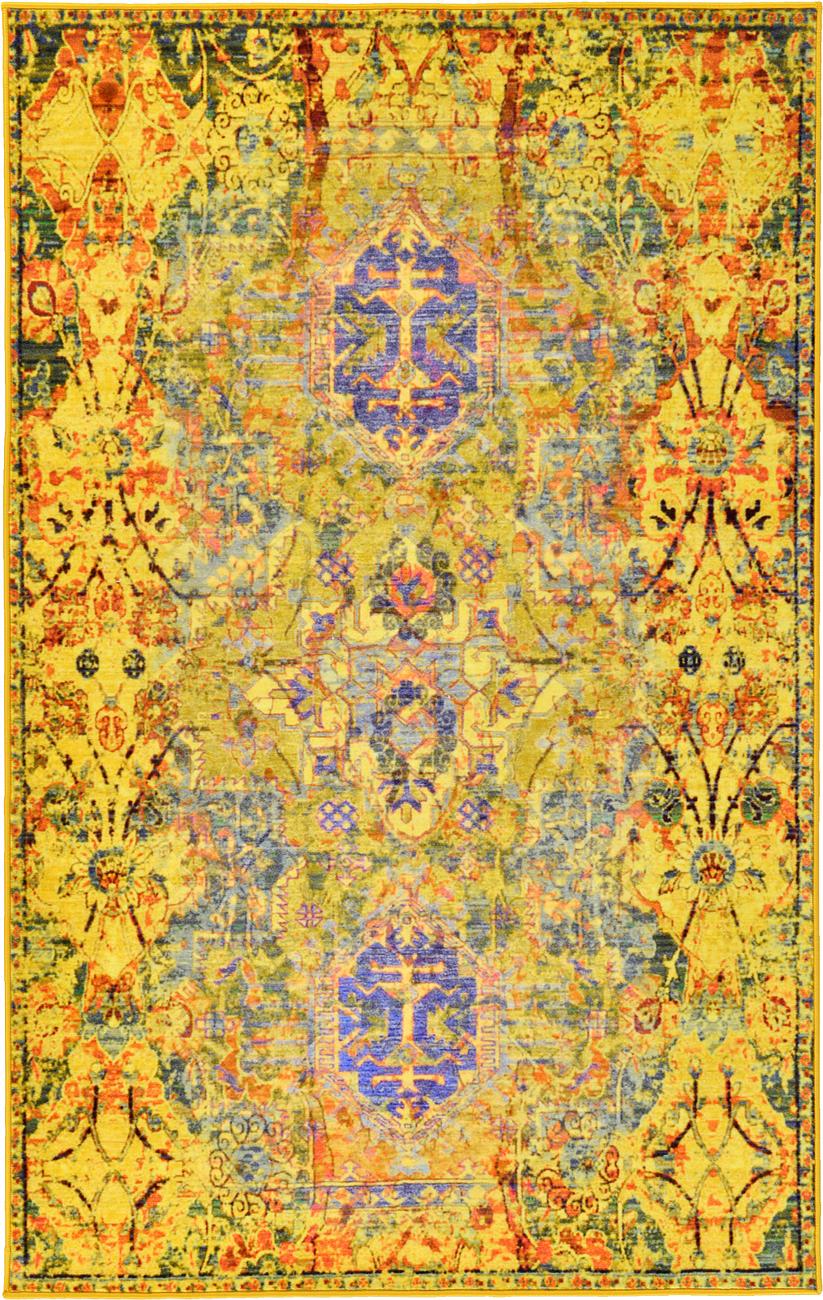 This one is probably my favorite so far. 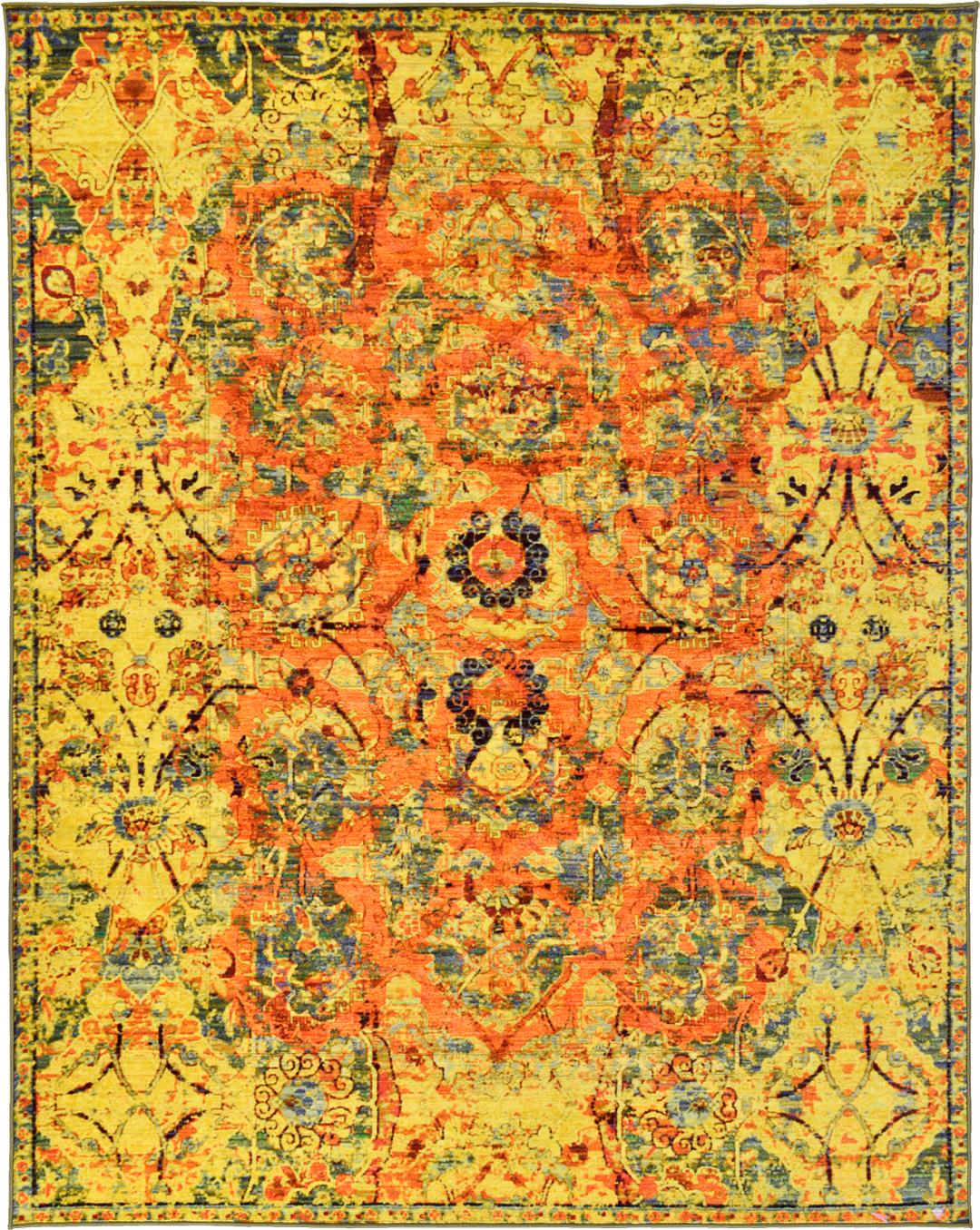 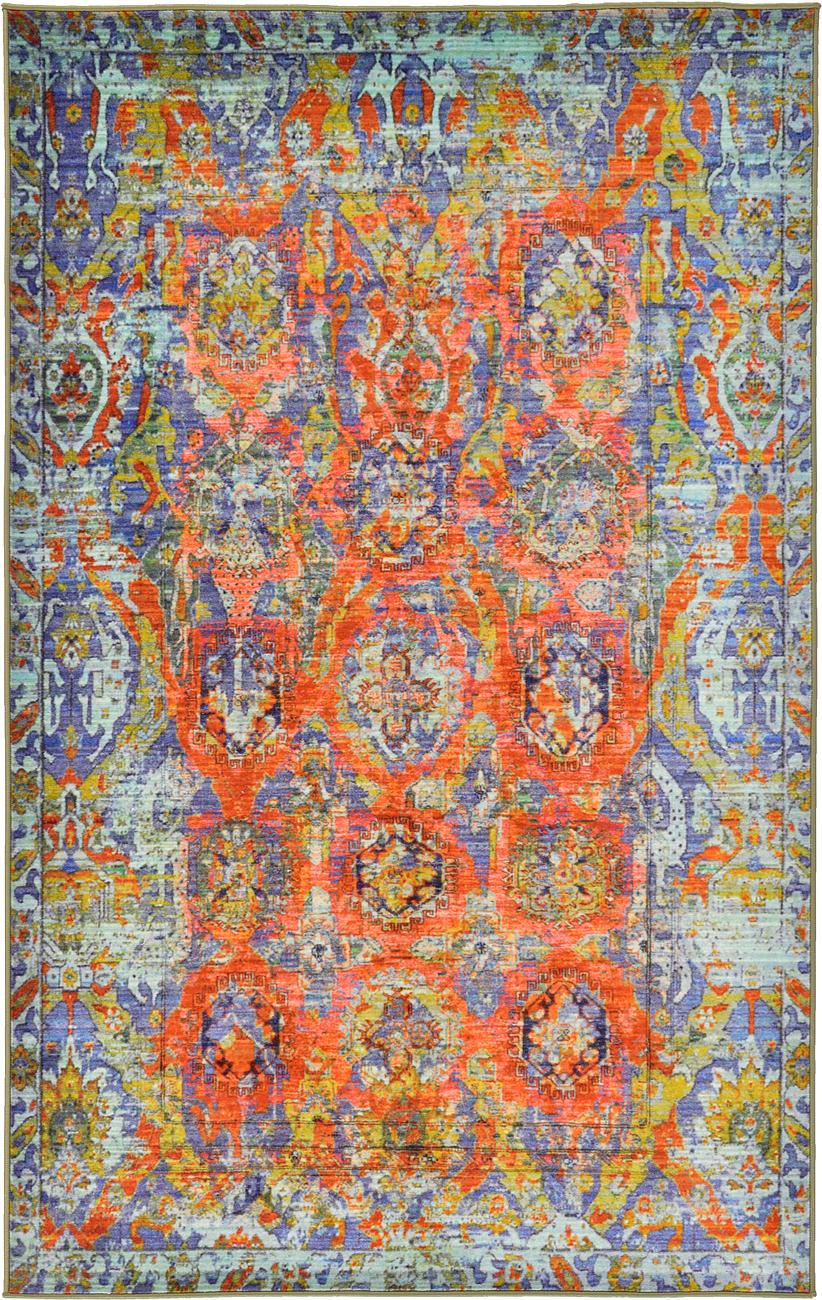 This one feels a little cheaper to me, for some reason. 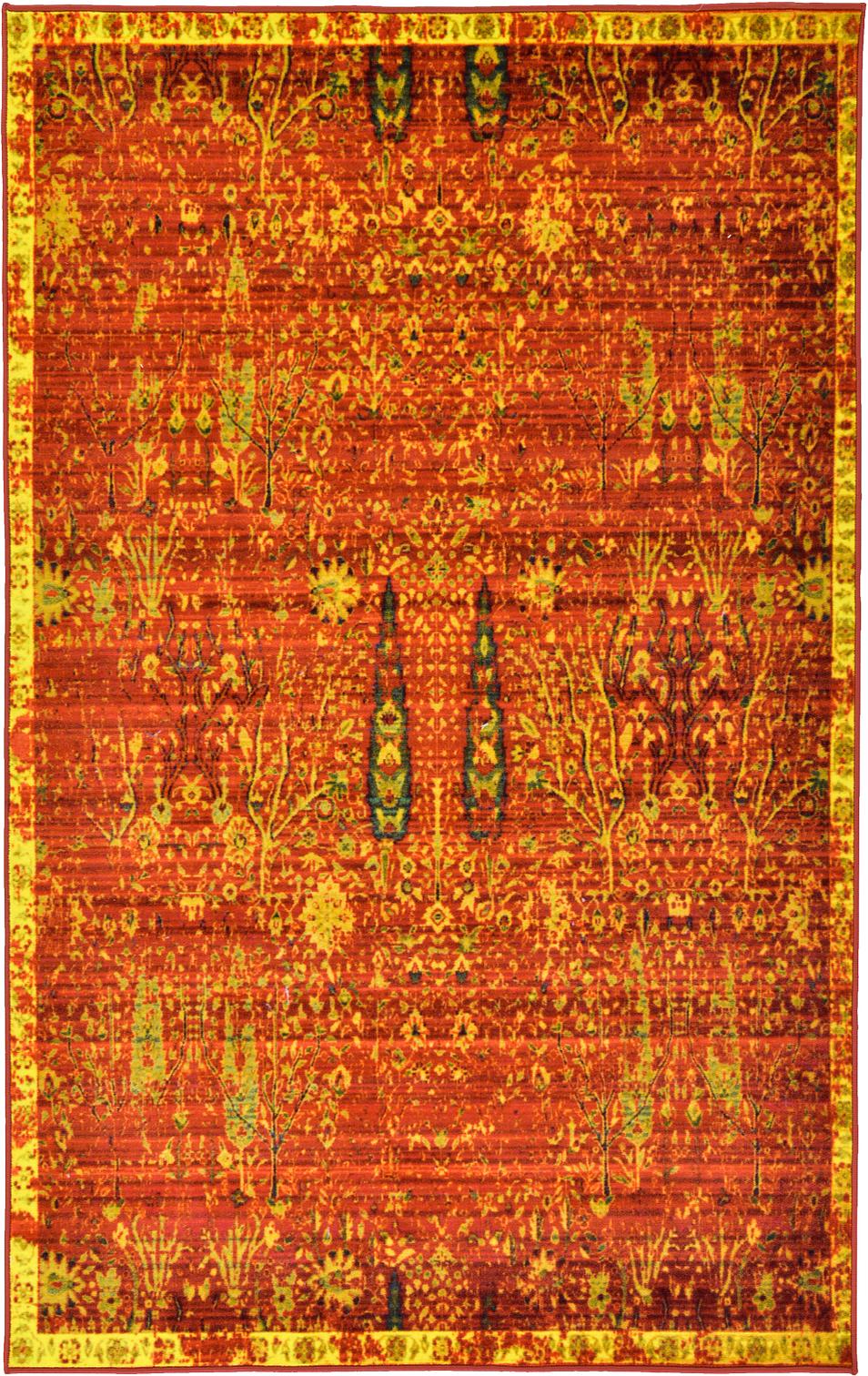 This one doesn't blend color-wise quite as well, but I really like the design. 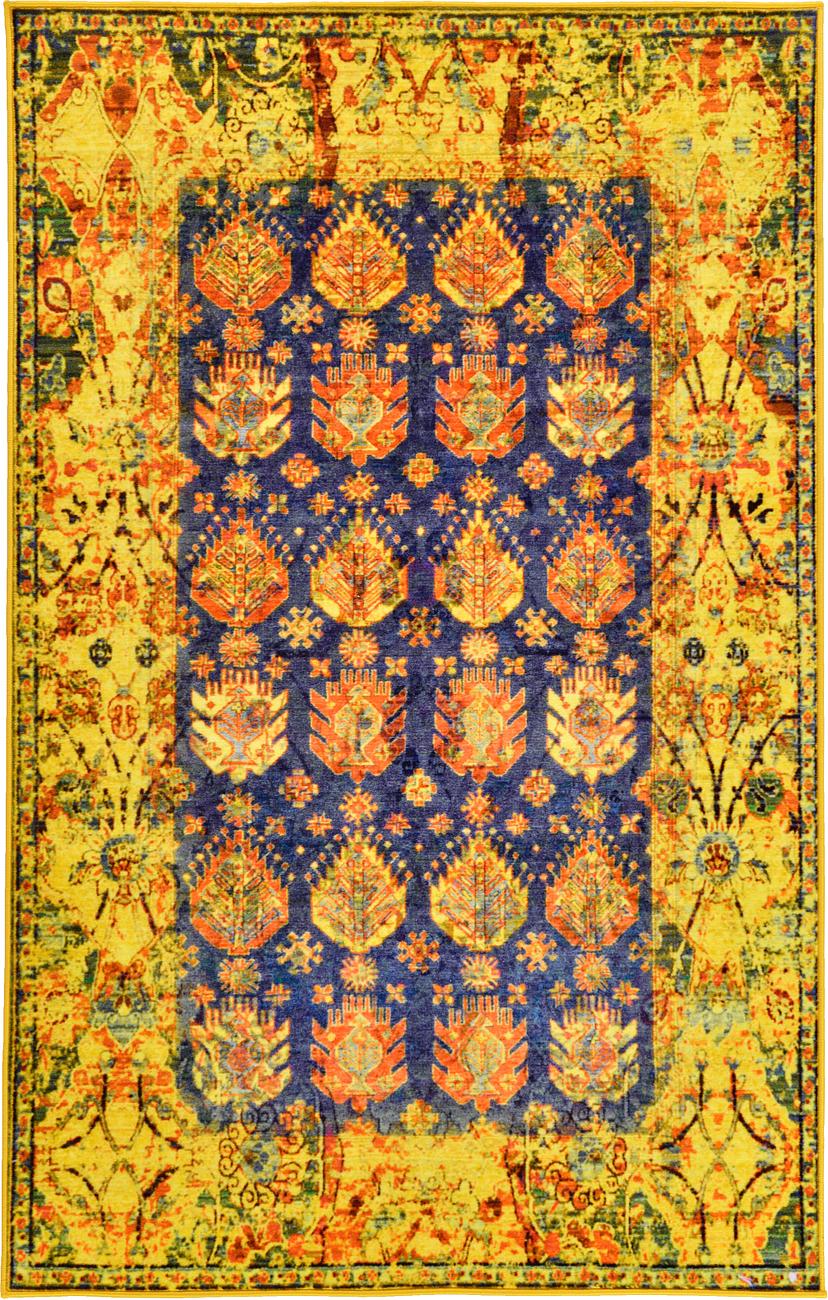 As a side note, all these rugs are from eSaleRugs.com, and they are having 50%-60% off as a pre-black Friday sale today!  I have not ordered from them before, but I'm finding their free return policy quite attractive, as that's always been the tricky part of ordering rugs online, in that it's super expensive to ship them back if they don't quite work out.

For someone who doesn't typically follow patterns and instead just makes it up as she goes, I have a large collection of patterns, both pdf and printed.  One of the reasons I don't use them is that I can never remember what I have and what I've made, and any thoughts I had about them when I made them!  I've been struggling to get things under control for a while now, and I think I have a fairly good system in place (although it's maybe a bit too complex at the moment).

Step 1:  Wrangle all physical patterns into one place and put them in order
I looked at a few different solutions, and one of the difficulties with this step is that pdf patterns tend to just be larger and more unwieldy than regular printed patterns that come in neat little envelopes.  Once I use a printed pattern though, I'm not very good at stuffing them back in the little envelopes neatly.  I don't remember where I got the idea, but I ran across these things called job ticket folders, which are basically heavy duty plastic sleeves.  They are typically used for construction jobs, and other types of projects where there are important pieces of paper that need to be around for a while.  I ordered 60 of them on Amazon, as I wanted everything to be in the same system, even if they are probably overkill for the printed patterns.  I have a canvas bin they fit in perfectly, with just a little room to grow.  If the collection does grow, I have another bin they can overflow into.  I organized them by pattern type (i.e. dresses, pants, shirts, etc), but I didn't worry too much about them being in a specific order, because I have a solution for not having to dig through them too much coming up.  I am thinking about doing some kind of common label across the top of the sleeves, but that might be overkill, since it's fairly easy to tell what each pattern is just by looking.  I think that might just be busy work. 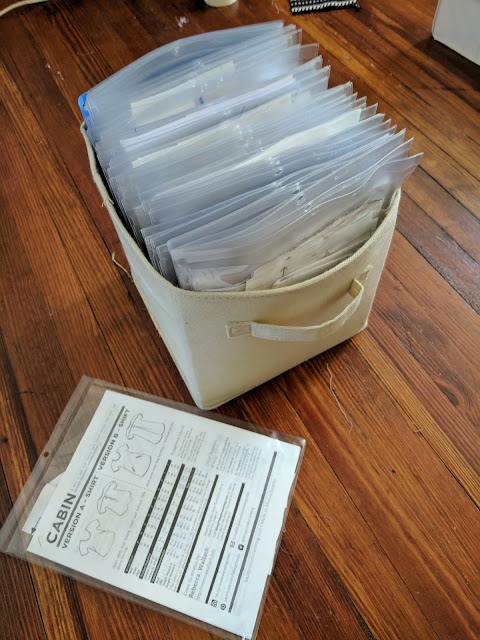 Step 2:  Wrangle all digital patterns in one place and put them in order
I tend to use pdf patterns a lot, which while they do have their drawbacks (i.e. who wants to tape together 32 pieces of paper?), I like the flexibility of reprinting them if I make changes, and I'm not going to lie, the instant gratification of downloading.  This means a lot of digital files though, so I set up a folder on my Google Drive (which I use for all my documents except photos), and I use a common naming scheme to make it easier to find things:
pattern type-brand-name (i.e. Dress-Named-Inari.pdf)

Step 3:  Put everything in a pattern binder
As I mentioned in Step 1, I don't want to have to dig through all the patterns to see what I have, so instead I took a note from the big pattern companies and made a book!  I made a Word document which has one page per pattern, and I pasted either a picture of the front and back of the pattern envelope or the relevant info for pdf patterns, and left space for notes.  This way I can say, oh, I would like to make a dress, and flip through all the dress patterns without having to spread them all over the place to see what I have.  It's a lot of work, and I've only just started doing it, so we'll see how this goes.  In theory, I love the idea, but maybe I would rather just sew than spend the time keeping up my pattern binder. 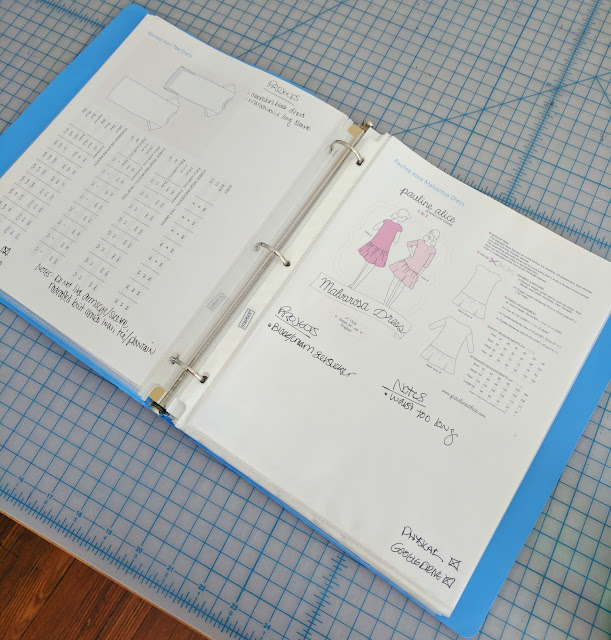 Step 4:  Pull it all together in a database
This step is super similar to Step 3, just in an electronic form, the main difference being it doesn't contain the pattern images and info (like fabric requirements, etc).  Being an engineer, I want to have a database of everything, so I set up a note in Evernote that keeps track of all my patterns, whether they are a physical pattern (either a printed pdf or a regular pattern), if they are in Google Drive, in the pattern binder, and if I've made them before.  This is a lot simpler to keep up than the pattern binder, but it a bit repetitive.  This is a quick way to make sure I have properly filed all patterns in their respective places though. 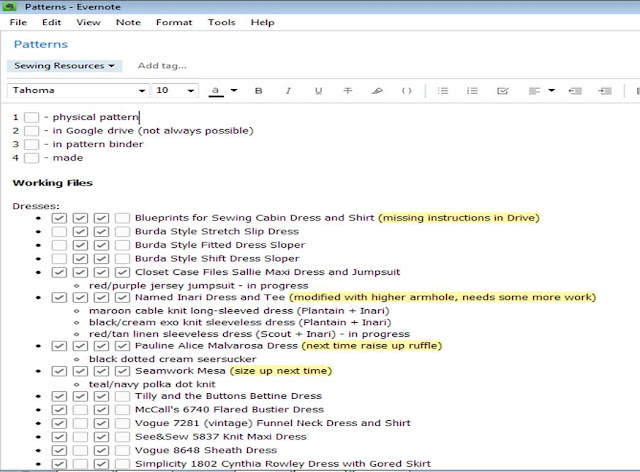 It's a bit of work to get it all set up (primarily getting my pattern binder all put together), but theoretically it will be fairly simple to keep it going and insert new patterns in the mix.  Anyone have any good suggestions to simplify?  How do you store patterns and keep track of them all?  Am I just crazy? :)
Posted by McLaura at 10:56 AM No comments:

I'm back at my wardrobe investigation - trying to figure out what I like and what looks best, and for some reason it's so much easier to figure these things out via photos versus just looking in the mirror.  One of my favorite things to wear is black/white stripes, so I played with a couple different proportions this morning. 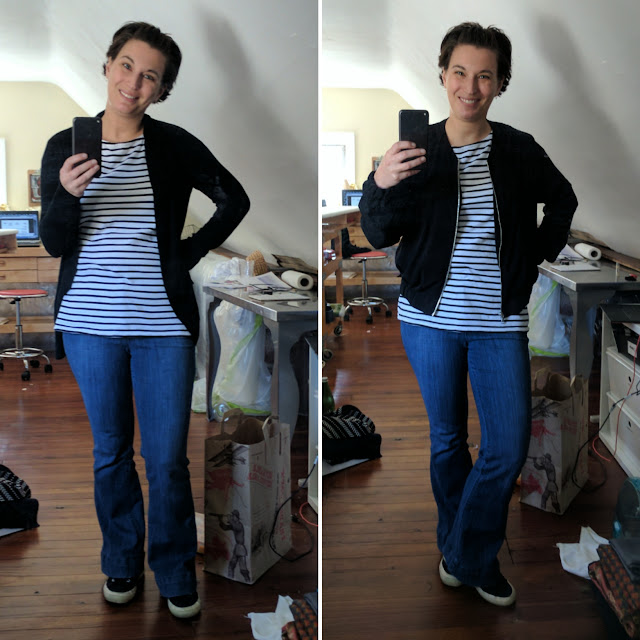 The non-changing part of the outfit:

Where things started to change - the topper:


Overall, still not the greatest outfit, but I have learned that hip-length shirts require a hip-length (or longer) topper.
Posted by McLaura at 11:33 AM No comments: